Nilsu is an MPhil candidate in Politics (Comparative Government) at Exeter College, University of Oxford. Her research at the DPIR focuses on the onset of ethnic group rebellion in the Middle East, using Turkey and Syria as case studies. At Oxford, she is currently working as a research assistant for the SCHOOLPOL project and is an editor at the Oxford Middle East Review (OMER).

Prior to joining the DPIR, Nilsu received her BA in Political Science and History with distinction from the University of California, Berkeley. Her undergraduate honors thesis explored the Kurdish question after the end of the First World War. At Berkeley, Nilsu worked as an open-source investigator at the Human Rights Center, where she led investigations on war-crimes and human rights violations for Amnesty International and Human Rights Watch using open-source intelligence (OSINT) techniques such as spatial analysis via satellite imagery, weapon identifications and imagery forensic analysis. Selected as a Human Rights Fellow by the UC Berkeley School of Law in 2020, she was funded to work for a legal mechanism of the United Nations in investigating the violations committed against the ethnic minorities in Myanmar. Passionate in using intelligence methods, Nilsu has also worked as a consultant for a Washington DC think-tank, Center for Advanced Defense (C4ADS), in discovering the financial drivers of conflict within regions facing civil wars and insurgencies. 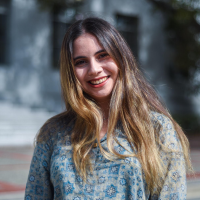