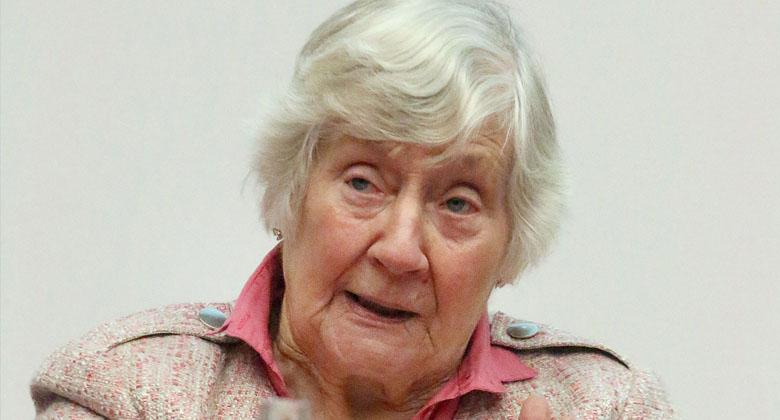 Baroness Shirley Williams of Crosby studied Philosophy, Politics and Economics (PPE) at Somerville College from 1948 and, in 1950, became the first woman to chair the Oxford University Labour Club.

Shirley Williams was one of the first female cabinet ministers and served in the Labour Governments from 1974 to 1979 before helping establish the Social Democratic Party in 1981 as one of the ‘Gang of Four’. Shirley was President of the SDP from 1982 to 1987 and supported the party merging with the Liberal Party to form the Liberal Democrats.

Besides an illustrious career in politics, Shirley Williams had a career in journalism for many years and also pursued an academic career. In 1987, she became Professor of Elective Politics at Harvard University’s Kennedy School of Government. She also served on the Senior Advisory Committee of Harvard’s Institute of Politics and was involved in the development of emerging democracies in Central and Eastern Europe.

During her time at Oxford, she became heavily involved in political debate and was a member of the Oxford University Dramatic Society (OUDS), touring the United States playing the role of Cordelia in an OUDS production of Shakespeare's King Lear.

Upon graduation, Shirley Williams was awarded a Fulbright Scholarship and studied American trade unionism at Columbia University in New York City for a master's degree, awarded by Oxford in 1954. There she met her future husband, the philosopher Bernard Williams.

Shirley Williams was elected to the House of Commons for Hitchin in the 1964 general election. She served as Minister for Education and Science from 1967 to 1969 and Minister of State for Home Affairs from 1969 to 1970. She was Shadow Home Secretary from 1971 to 1973. In 1974, she became Secretary of State for Prices and Consumer Protection. She served as Secretary of State for Education and Science and Paymaster General from 1976 to 1979. She lost her seat to the Conservative Party at the 1979 general election. She was elected to Parliament for the SDP in a famous by-election at Crosby in 1981, holding the seat until 1983.

Shirley Williams was also a visiting Fellow at Nuffield College and an Honorary Fellow of Somerville College. She took her seat in the House of Lords in 1993, serving as leader of the Liberal Democrats in the House from 2001 to 2004. She was active in the House until her retirement in 2016.

Kalypso Nicolaïdis, who met Shirley in 1986 at Harvard Kennedy School when she was starting her PhD and taught together on the EU, said Shirley did everything masterfully.
“She had a unique way of combining authority and humility,” she added.
“I witnessed the way students were inspired by her musings, from the minutia of domestic politics to a wisdom on grand strategy that can only come with her deep empathy in travelling around the world.”