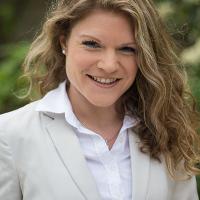 She also received an award for the Best Article or Edited Volume Chapter by a Section Member in the Latin American Studies Association’s 2021 Section Awards.

Annette’s article, The Logic of Illicit Flows in Armed Conflict, demonstrates how we need to study armed conflict and transnational organised crime together in order to understand unstable regions.

It looks at how the location and structure of illicit flows of drugs, weapons, or money, influence cooperative arrangements between opposing violent non-state groups . The article uses both ethnographic methods and ArcGIS software-supported spatial analysis based on satellite images, photographs, and other data.

“I’m absolutely delighted to receive these two awards! There’s still a bias in political science towards studying armed conflict in isolation, without looking much at organised crime,” said Annette.

“My work demonstrates how the two fields cross-fertilise and that, ultimately, we must study both together to grasp current global security dynamics. It’s fantastic to see the importance of this approach being recognised through these awards, and I hope it encourages more scholars to move into this direction with their work.”