David’s core research interests lie in the history of political thought and in the political theory of family law. He volunteered as a courthouse childcare specialist and for three years as a court advocate for survivors of domestic violence and sexual assault. Thanks to two grants from Duke University, David has researched child protection and removal in U.S courthouses, at historical archives in Spain, and as an invited Visiting Researcher at the Monash University Law Faculty in Melbourne, Australia. David's MPhil research is exploring patriarchal marriage in the thought of John Locke. 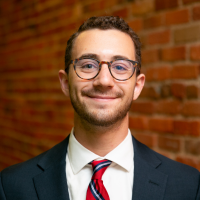