'Civics Beyond Critics: Character Education in a Liberal Democracy' by Professor Ian MacMullen 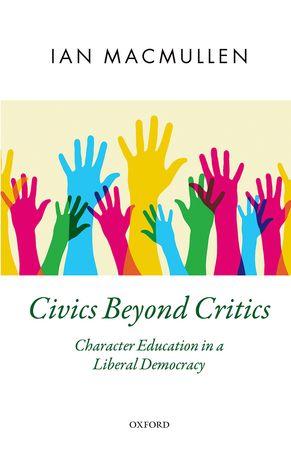 Should character formation be a goal of civic education in a liberal democracy? In addition to teaching knowledge and skills, should civic education shape children's values, beliefs, preferences, habits, identities, and sentiments? Most contemporary political and educational theorists who address these questions respond with a heavily qualified yes. They argue that education for civil character is vital to the survival and flourishing of liberal democracy but its content must be strictly limited to avoid compromising its recipients' ability to think and act as critically autonomous citizens. This means that civic character education should not extend beyond inculcating in children the basic and universal moral values that constitute the ideal of liberal democracy itself.

Civics Beyond Critics argues that this orthodox view is wrong to prioritize critical autonomy over three other valuable character traits that have traditionally been fostered by civic education: law-abidingness, civic identification, and support for the fundamental political institutions of one's society. But the best alternative is not simply to reverse the priority. The goal of this book is to show how we can recognize the value of the kinds of character formation that civic education has traditionally involved without losing the portion of the truth that can be found in the orthodox view.Civics Beyond Criticswarns against neglecting character traits that, although commonly labeled 'conservative', are realistically essential for the future of all liberal democracies.

Born and raised in England and educated at Oxford and Harvard universities, Ian MacMullen is a Political Theorist who specializes in the Politics of Education and of Religious and Cultural Pluralism.

He studied PPE at New College from 1995 to 1998, and is an Assistant Professor of Political Science at Washington University in St. Louis.