'Congress’s Constitution: Legislative Authority and the Separation of Powers' by Josh Chafetz 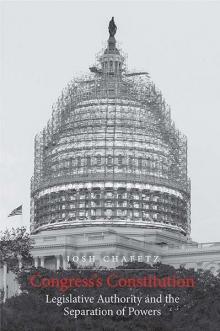 Professor Josh Chafetz (MPhil and DPhil, 2001) has written his second book, Congress’s Constitution: Legislative Authority and the Separation of Powers.

Congress is widely supposed to be the least effective branch of the federal government. But as Josh Chafetz shows in this boldly original analysis, Congress in fact has numerous powerful tools at its disposal in its conflicts with the other branches. These tools include the power of the purse, the contempt power, freedom of speech and debate, and more.

Drawing extensively on the historical development of Anglo-American legislatures from the seventeenth century to the present, Chafetz concludes that these tools are all means by which Congress and its members battle for public support. When Congress uses them to engage successfully with the public, it increases its power vis-à-vis the other branches; when it does not, it loses power. This groundbreaking take on the separation of powers will be of interest to both legal scholars and political scientists.

More information is available on the publisher's website: http://yalebooks.com/book/9780300197105/congresss-constitution