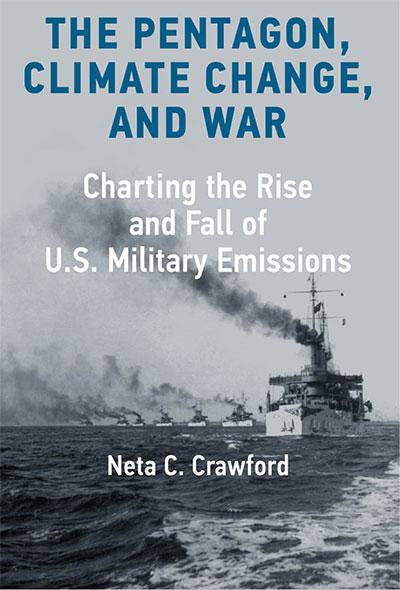 Montague Burton Chair in International Relations Professor Neta Crawford explores the Pentagon’s record on greenhouse gas emissions in her new book The Pentagon, Climate Change, and War: Charting the Rise and Fall of US Military Emissions.

In the book, Professor Crawford shows how US military emissions got to be so large, by tracing the adoption of fossil fuels by the military from the 19th century to the present. The book also examines the ways military technological demand has driven commercial industrial adoption and civilian use of fossil fuels.

The Pentagon was instrumental in keeping US military emissions reporting largely out of the Kyoto Protocols out of a concern that this would lead to regulation. On the other hand, the Department of Defense has been a leader in funding climate change science since the 1950s and has recently begun to both adapt to climate change and reduce its emissions.

Professor Crawford said: “I hope that people will think about the scale of military emissions and the role of the military as a driver of civilian emissions.”

Professor Crawford is currently finishing another book, To Make Heaven Weep: Civilians and the American Way of War.

She will be launching her new book in a discussion with Professor Oliver Belcher (Durham University) and Professor Jan Selby (Sheffield University) in the Lecture Theatre at DPIR’s Manor Road building at 4pm tomorrow (Thursday, 20 October).

I hope that people will think about the scale of military emissions and the role of the military as a driver of civilian emissions.